The European Desalination Society – EDS in collaboration with the Instituto Tecnológico de Canarias (ITC) in the framework of E5DES project (DESAL+ Living Lab platform) presents a series of webinars to celebrate during 2021.

The monthly webinar series started in January 27th 2021 and is continued until May/June 2021, with a total of five (5) webinars. The webinars are planned to take place in the later afternoon GMT time zone (+1h for CET). All the webinar recordings and the presentations will be accessible for EDS members and registrants who attended the webinar.

The first webinar, was titled “RECENT TECHNOLOGIES FOR COUPLING PHOTOVOLTAIC ENERGY WITH REVERSE OSMOSIS” lasted two hours, with 3 presentations of 30 minutes each followed by a Q/A round.

The geographical coincidence of water scarcity with high availability of solar radiation makes desalination powered by solar energy the most sustainable solution to the increasing water crisis. The use of solar radiation can also facilitate the deployment of desalination technologies by avoiding the carbon emissions associated to the high-energy consumption.

In this webinar, the coupling of photovoltaic (PV) radiation with reverse osmosis (RO) for stand-alone desalination was discussed. First, Instituto Tecnológico de Canarias presented their long experience designing and installing PV-RO systems in remote areas, and introduced their updated and upgraded DESSOL 2.0 system. Then, some innovations that avoid the use of batteries were discussed. Elemental Water Makers use an elevated storage for continuous operation of the PV-RO unit. Mascara works in adaptive control and alternative short-time storage techniques to achieve 24-hour operation of PV-RO.

The webinar was moderated by Guillermo Zaragoza from the Plataforma Solar de Almería (PSA) and counted with the following presentations: 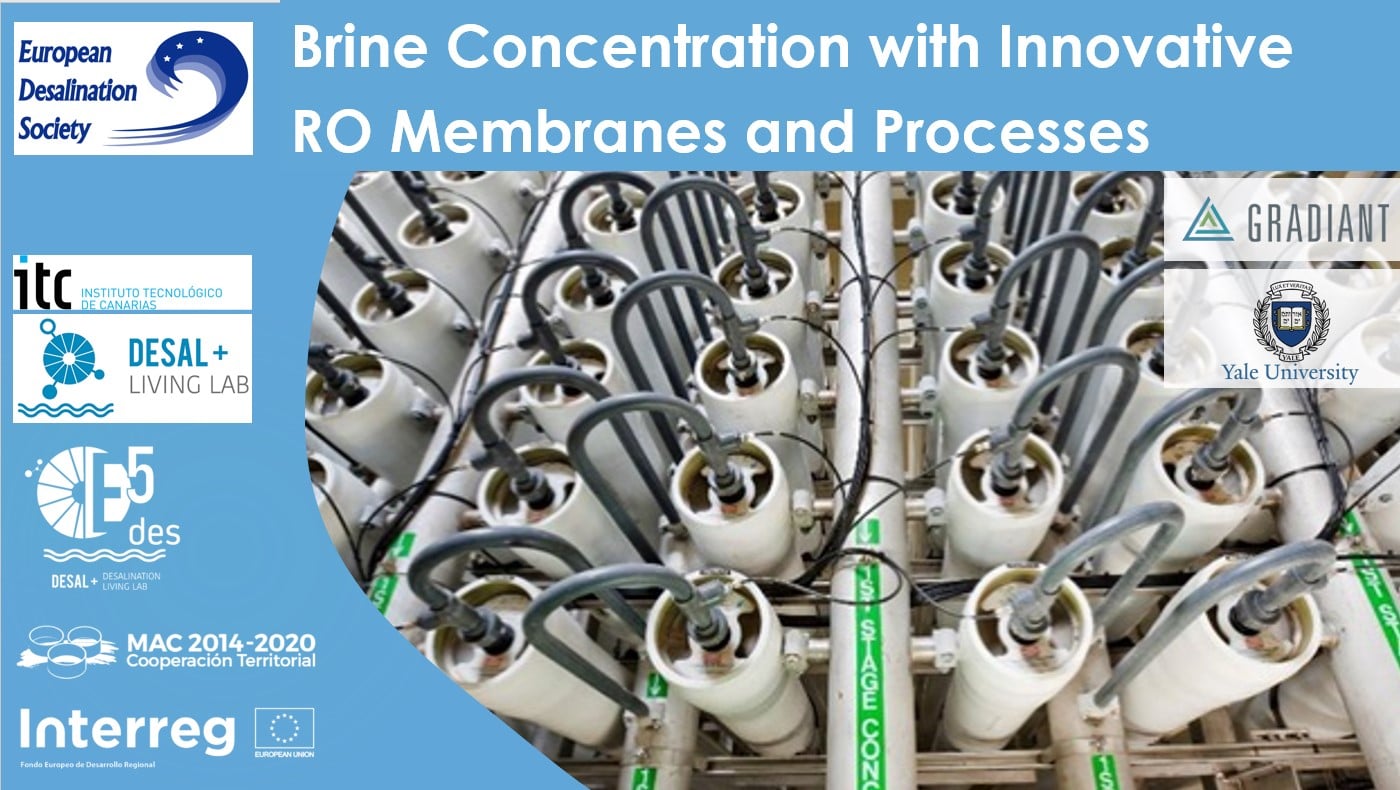 The second EDS webinar was titled “BRINE CONCENTRATION WITH INNOVATIVE RO MEMBRANES AND PROCESSES”. The event lasted 2 hours and featured two presentations, after which there was a round of questions from the attendees to which the speakers gave answers. The webinar was moderated by Jorge Malfeito from Acciona Agua and counted with the following presentations:

For inland desalination processes, brine can be a major financial and environmental challenge. For seawater desalination plants, constrained or constrained intakes or pre-treatment systems can limit the ability to increase freshwater production. Concentration or desalination of brine is desired in these applications but has been limited by the cost and technical limits of existing thermal and membrane desalination methods.

The Counter Flow Reverse Osmosis (CFRO) process is a membrane-based method for desalinating brines at a fraction of the cost and energy consumption of ultra-high-pressure or thermal brine concentrators. This presentation provides technical details of the membrane brine concentration processes and reports experiences from a number of installations as case studies.