Wave-powered desalination systems are gaining momentum in an attempt to ensure the supply of potable water to coastal communities and islands, while reducing the environmental impact of the process and lowering operating costs through the use of a renewable energy.

At least two wave-powered desalination prototypes will be run at PLOCAN during the next biennium. The Danish company Wavepiston AS has chosen the test site of The Oceanic Platform of The Canary Islands (PLOCAN) to test its technology in open-waters and rise it from a TRL 4 to a pre-commercial phase. Likewise, the COOSW project, coordinated by The International Center for Numerical Methods (CIMNE) and of which PLOCAN is a partner, proposes a solution that uses the temperature gradient of the water column and the wave energy for the desalination of sea water and the refrigeration of small facilities near the coast.

Wavepiston AS, in consortium with Vryhof, Fiellberg and Enermed, proposes a scalable wave-energy collector system for seawater pressurization, connected through a pipe to land. This solution can generate both desalinated water and electrical energy, injecting the pressurized seawater into either a reverse osmosis desalination system or a turbine, respectively. This project, called “Wave to Energy and Water”, has received funding from the European Union’s Horizon 2020 – Fast Track to Innovation Instrument Programme Grant Agreement 831041. Likewise, Wavepiston AS is collaborating with PLOCAN within the framework of the E5Des project, in the intrinsic use of renewable energies in desalination and the development of new technologies that improve the efficiency of the process. In the image above, a piston line from the Wavepiston system is shown. 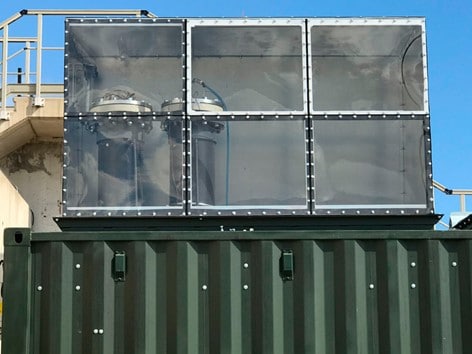 The COOSW solution uses a wave-energy converter (WEC) for two purposes: to pump cold seawater from deeper layers to be used in the cooling process using SWAC (seawater air conditioning) technology, and to desalinate using COOL STEAM technology, a desalination method based on vacuum distillation that allows it to be carried out at low temperatures. The multistage vacuum distillation system, with an electrical energy requirement of less than 1.7 kWh / m3, benefits from the thermal gradient between the cooler pumped seawater and the heated water in the cooling process.

PLOCAN provides the suitable conditions to carry out the open-water tests of these innovative prototypes that use ocean renewable energies and apply emerging technologies to achieve more sustainable desalination systems with lower energy costs. These lines of research are aligned with the objectives of the Desal+ Living Lab platform and the E5Des project, of which PLOCAN is a partner.