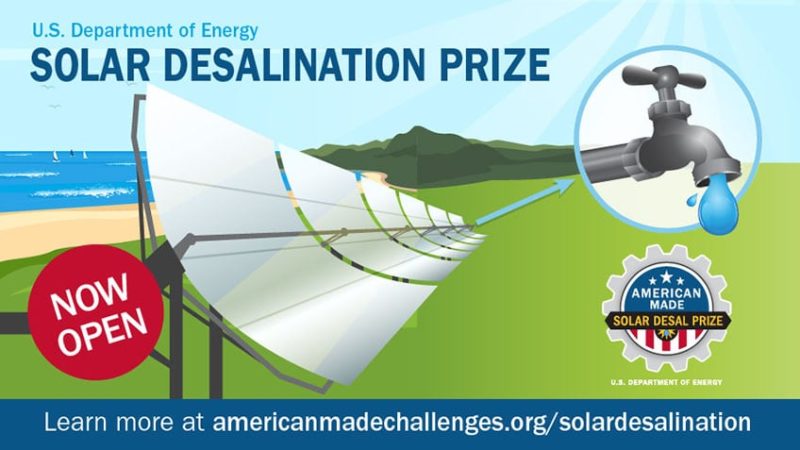 On April 28, with support from the National Renewable Energy Laboratory (NREL), the U.S. Department of Energy (DOE) kicked off the Solar Desalination Prize, a $9 million competition that’s part of the American-Made Challenges series.

The competition is designed to accelerate the development of systems that use solar-thermal energy to produce clean drinking water from salt wáter.

NREL manages each of the American-Made Challenges for the DOE.

Electricity costs account for up to half the expenses for state-of-the-art desalination plants, which have difficulty treating very-high-salinity water. Solar-thermal power, in the form of either electricity or heat, could reduce the cost of desalination from high-salinity sources, such as produced water from subsurface oil and gas extraction.

The prize is part of the American-Made Challenges Network, which aims to incentivize the nation’s entrepreneurs to strengthen American leadership in energy innovation and domestic manufacturing. These new challenges seek to lower the barriers U.S.-based innovators face in reaching manufacturing scale by accelerating the cycles of learning from years to weeks, while helping to create partnerships that connect entrepreneurs to the private sector and the network.

In the first phase of the competition, participants submit innovative concepts with pathways to their manufacture and commercialization. By the end of the competition, each team will have designed a solar-thermal desalination system, obtained the necessary permitting and approval documents, built the system, and then demonstrated the operation of the system.

Submissions for the first phase are due July 16.